And when the Lafayette Regional Airport executive director uses the word future, he quickly adds linguistic relatives such as expansion, growth, and most fitting for the state-of-the-art terminal, tomorrow. You see, as much as Picou wants to make a difference for today’s travelers, he also wants to be ready for the travelers yet to come.

“Just in terms of sheer size, we’re ready to make a substantial difference in the air traveler experience for anyone who arrives at — or departs from — our airport,” he says. “We’re going from a 60,000-square foot facility to a 100,000-square foot facility.” So, just the drive-by visual is sure to elicit a “Wow, look at that!” But the oohs and ahs that are sure to come, explains Picou, owe a lot to what happened years before.

Cue: Picou’s eternal gratitude to the people of Lafayette for setting progress in motion. 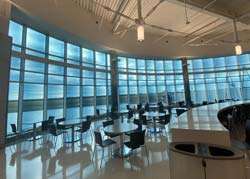 “Prior to my arrival seven years ago, Lafayette voters passed a one-cent tax, and through that, we raised $33.5 million,” recalls Picou. “That first step, having that amount of money in hand well before we even broke ground, truly made this all become a reality.”

Picou says that kind of foresight and initiative is a rarity for communities the size of Lafayette. “Typically, the city leaders go to the FAA (Federal Aviation Administration) with no money and say, ‘Here’s what we want to build.’ Then, the FAA looks at them and asks, ‘Well, what’s your plan?’ and those communities are usually turned down.”

“With $33.5 million in hand, we were able to tell them, ‘We already have a plan.’ They got silent, ready to turn us down. We headed to the door and when they realized what we’d just told them, the FAA incredulously asked, ‘Wait. What? You have what?!?’” Picou laughs for a few seconds. “That kind of support from the citizens of Lafayette was very beneficial.” Which leads this proudly repeated proclamation: “We’re under-budget and cost-free.”

It’s all been a very long time coming. “The original terminal was built in the 1950s, and it was remodeled in the 1980s and early 1990s,” offers Picou. “After the FAA approved our project, we had three designs submitted, eliminated one, and then went back to the public who made the final selection of what’s happening here.”

Picou beams gratitude to the general public and pride for his team’s fiscal responsibility. “Our budget for the entire airport project — the terminal and all of the other items — was in the area of $150 million, and we came in a bit under budget, probably around $149 million,” says Picou. “We were able do it throughout; the terminal alone was budgeted at $65 million, and we came in at $62 million.” But dollars and FAAs and approvals will quickly be forgotten once the terminal is operational (at the writing of this article, that’s scheduled for late January 2022).

“Travelers will drive up, and right away they will see improved parking,” says Picou. “In fact, we’ll have 200 more parking spaces than we did at the old terminal. Add to that a well-lit canopy system to assist in parts of the walk to the terminal which, in-and-of-itself, is a very modern building with durable flooring that looks great, with a lot of sparkle and brilliance.”
And then, the experience really begins. 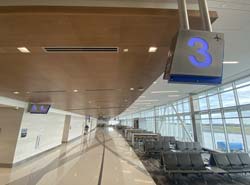 “When you go to the ticket counter, you’ll be able to hand your bag directly to airline employees. You won’t have to bring it over to TSA agents the way you have to do it today. It will be scanned in the back, and you won’t see the bag until you arrive at your destination. Then, it will travel the carousel and be carried to your aircraft.” After that, news and gifts will be available on both sides of security checkpoints.

Then, it’s off to your gates, but not before you and your carry-ons are analyzed. “There will be two full-service TSA lanes, although — keeping with our theme of planning for the future — we will have room for three,” says Picou. “Then you’ll enter the rotunda, with a great observation area from which you can look out onto the airport (utilizing glass that darkens and lightens as needed), and then a full-service restaurant and bar.”

Here’s one of my favorite amenities: In this age of connectivity, all chairs — that’s all chairs — will have USB ports and 110v-outlets within arm’s reach. “We’ll even have some areas that are kind of a cubicle, with charging ports, high-top tables, one or two seats, and some sound dampening qualities, kind of like a small personal office,” smiles Picou.

Restroom-goers have traditionally had to be amateur contortionists in the old terminal, but all of that’s about to change. “Oh, so much larger than the current building,” says Picou.

“Everything’s built for comfort and ease of use. We’ve made the stalls longer, so travelers can wheel in their luggage with them, and then there are shelves right in front of you. Just grab your stuff and go.” Every restroom will have a family room associated with it, with diaper-changing stations. And for mothers nursing small children? “We’ll have two mother’s rooms, pre-security and post-security.”

Lights will be all LED. Jet bridges will be all brand-new. No more running on 40 year-old chillers held together by bubblegum and bailing wire. “And even though we don’t have them coming yet,” continues Picou, “we will be able to handle 737 traffic and other kinds of bigger aircraft. I truly believe they’re coming.”

A final note: The approved terminal design is called ‘Journey,’ a title that Picou believes is more than fitting for the new Lafayette Regional Airport.

“We are the Hub City. And Louisiana is a melting pot, made up of people of various ethnicities,” said Picou.
“We are honored and humbled to have a new facility worthy of those who have made up our past, present and future.”