Haunted or Not, People Still Flock to the Grand: More Than 100 Years Old, the Opera House in Crowley Still Lights Up a Stage

The vision of David E. Lyons was never a ghost. He had one vision and that was to bring culture to his beloved town of Crowley, Louisiana. He did so by building the Grand, a twenty-two thousand square foot second-story opera house, which was a rare feat when not too many two-story opera houses existed.

Lyons was born in 1867, and at the age of 29, he purchased the property for a mere $500 and began building his magnificent opera house, completed two years later, for $18,000. He carefully constructed his masterpiece using virgin Louisiana cypress, pine and oak. 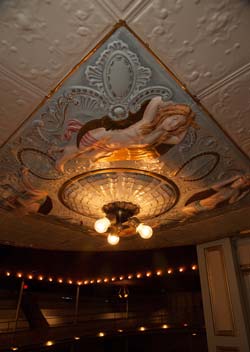 The mostly wooden structure was accented with pressed tin tiles and hand painted angel medallions in the four-boxed seats. The steep slope of the floor created perfect sight lines for the one thousand seats it is said to have held. Opening night was November 23, 1901. Research shows that 800 patrons showed up to see Harry Ward’s Minstrels. The local newspaper wrote of the night: “It was a pleasant surprise to all of them that Crowley possessed such a beautiful little playhouse.” For 39 years it served as host to such big names as Huey Long, Clark Gable, Enrique Caruso, Babe Ruth, and Madame de Vilchez-Bisset of the Paris Opera.

In 1916, D.W. Griffith’s epic masterpiece, “Intolerance,” about man’s inhumanity was a major event at the Grand Opera of the South in Crowley. The $2 million dollar cost of the silent film is often recalled as one of the two or three most influential films ever made. The Grand promoted their Symphony Orchestra of 20 and a Chorus. It cost between 75 cents to $1.50 to attend, depending on where you wanted to be seated in the theatre. Matinees cost as low as 50 cents. A film like this at the time was promoted as “colossal.” Advertisements further stated that 125,000 people , 7,500 horses, and 1,200 chariots were used in the film, along with 3,000 scenes that made the two-day stay at the Grand something that great-grandparents of Crowley told their children about through the years. When Lyons died in 1940, the opera house closed and was left nearly untouched and, fortunately, well preserved. Although research says it was hidden from the view of the public for nearly 69 years, it was never forgotten by its former patrons.

Today, it seems that most young folks or long-term residents of Crowley have more of an interest in the “haunting” of the Grand. Ghosts are on the lineup just as a rock and roll group like Louisiana’s LeRoux or the Cajun/French triad, Sweet Cecilia. Yes, it does appear that this gem of the south had a dark side … and to many, it was considered a haunted opera house. One group in particular over the years was given permission to find out what evidence there might be of the paranormal right in Crowley. Dark things indeed transpired in the history of this establishment.

It was a pleasant surprise to all of them that Crowley possessed such a beautiful little playhouse.

A photo taken in the 1920s shows what appears to be a figure standing in one of the box seats. Cold spots have often been felt by construction workers, shadows have been seen, and electronic devices have failed to work in certain areas. History has also shown that the opera house was the scene of several grizzly events. Two individuals were murdered upstairs, another two individuals died of natural causes, and one worker died from strangulation on the rafters above the stage. His death was neither labeled accidental or a suicide. 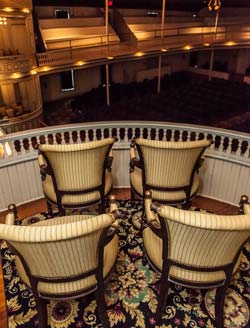 Haunted Nation and their staff set up eight infrared cameras on two DVR systems focusing on the stage box seats, and the area once used as a brothel and saloon. The group conducted very technical exercises to get the paranormal readings they hoped to find. Once an official investigation began, several unexplainable spikes in the electromagnetic field were detected where the maintenance man died from being hanged. No other findings were worth noting except for an audio clip where a female could be heard saying, “I can hear.” Unfortunately, paranormal investigations are no longer allowed, but in 2008 — haunted or not — the Grand reopened after receiving a grant from the State of Louisiana. A massive remodeling of the Grand took place and much of it was brought back to its former glory.

Throughout its history, the Grand has intrigued generations. During the time the Grand was closed, the downstairs was a working hardware store. In 1999, the now National Historic Landmark was purchased by the Gielen family of Crowley, the owners of the hardware store. Today, the Grand is a 501(c)(3) organization, governed by a volunteer board of directors. This treasure found in a small community and surrounded by prairie land is once again in line with its original mission, bringing stellar performances to audiences hungry for culture, entertainment, and a stage for established, emerging and local artists.